Booklist magazine published this review of Rawhide Robinson Rides a Dromedary: The True Tale of a Wild West Caballero: 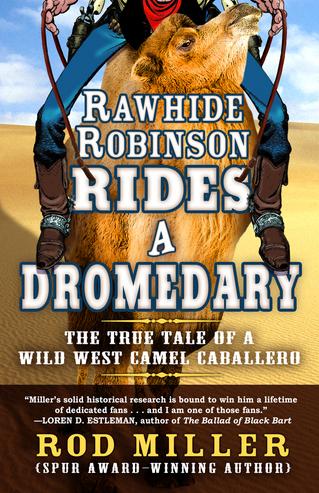 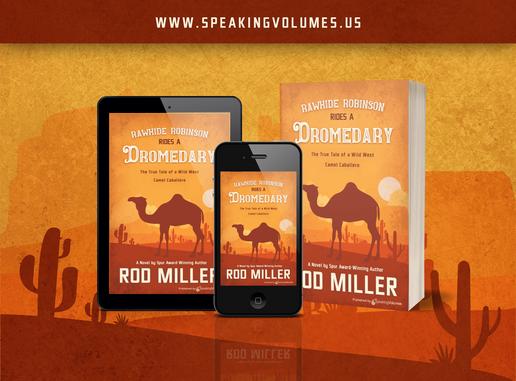 Rawhide Robinson Rides a Dromedary: The True Tale of a Wild West Camel Caballero from the February 2018 issue of the Historical Novels Review:

Rawhide Robinson, with his tall tales and 13-gallon hat, is lured aboard a ship and into service of the U.S. Army, but he is comforted with visions of acquiring mighty Arabian horses for the government. Anyone who has read Miller’s previous Rawhide Robinson novels (starting with Rawhide Robinson Rides the Range, 2015) knows the journey will not be uneventful. Indeed, Rawhide lassos a whale, foils a Mafia kidnapping, and thwarts a pirate invasion. But the biggest surprise is the cargo his new army friends are acquiring—not horses but camels. It takes some convincing from a young Turkish camel wrangler and her uncle, but eventually, Rawhide is the one telling American south-westerners that the dromedary really is a superior pack animal. Rawhide’s over-the-top storytelling (like the time he created the Great Salt Lake or the time he used his 13-gallon hat as a parachute) is complemented by Miller’s slapstick humor and verbal gymnastics. The book has an old-fashioned feel to it, especially when the saltier language is represented by punctuation. In all, a rollicking western that’s good, clean fun.

Seasoned cowhand Rawhide Robinson is the quintessential American cowboy if ever there was one. And he would be the first to tell you so in long, rambling, outlandish, and untrue—but entertaining—ways. In the latest installment of his humorous adventures by the Spur Award-winning author, he signs on to accompany US Army personnel to the Middle East to obtain what he thinks are horses to bring back to America. Rawhide is not terribly intelligent (though he can spin a mean alliteration when necessary), so he doesn’t figure out what kind of “horses” he is contracted to get until he’s in the middle of the ocean without a means of getting back home. Hilarity ensues.

[Readers] who enjoy tall tales, an iconic, if ridiculous, main character, and fun adventures will devour this quick, lighthearted read. They may even learn a thing or two despite themselves, since author Miller is a deft hand with research, Old West sensibilities, and small but interesting details such as the proper nautical terms for ropes.

and the original hardcover edition.

“Brik. It is meat, vegetables, and egg in pastry. Here,” Hurry said, handing Rawhide Robinson a small cup of a red pasty sauce. “Dip it in this.”

“Harissa. It is made from red peppers, so mind your tongue.”

“Horsefeathers! I been funneling chili down my gullet since long before you were born. Why, I’ve et stuff that’ll make your teeth sweat and singe your esophagus.”

With that, he dunked a corner of the brik into the harissa and scooped up a ponderous glob of the sauce and chomped off a substantial chunk of the sandwich.

With that, he went wall-eyed.

With that, his face turned the color of the harissa.

With that, perspiration popped from his pores and puddled around his boots.

With that, his tongue sizzled to a crisp.

With that, his teeth seared the inside of his lips.

With that, his stomach swelled as the steam inside sought escape.

With that, the hairs on his head scorched the innards of his thirteen-gallon hat.

With that, a blistering blast of his breath blew through the bazaar and elevated the ambient temperature like a Sirocco blustering off the Sahara.

“Yeeeehaaaaw!” he said upon regaining control of his faculties. “That’s good stuff!”

And he took another bite.

Hurry laughed until tears ran down her face as she watched tears run down Rawhide Robinson’s face as he masticated his second mouthful.

And yet another and another, until finishing his brik and the same again, Hurry munching right along with him, bite for bite.

Their stomachs full and appetites sated, the plethoric pair plodded off to the port, where Major Wayne and Ibrahim awaited them aboard the Cordwood.

Rawhide Robinson Rides a Dromedary: The True Tale of a Wild West Camel Caballero, Finalist for the Western Writers of America Spur Award and the Western Fictioneers Peacemaker Award, is available from Five Star, online booksellers, and through your local bookstore. You’ll delight in page after page of overseas adventure, Wild West hijinks, and tall tales.

​​​​​​​​​Rawhide Robinson Rides a Dromedary: The True Tale of a Wild West Camel Caballero is a tale based loosely—loosely—on the United States Army’s acquisition of camels and their experimentation with the critters as pack animals in the American Southwest.

With visions of fleet-footed Arabian horses, ordinary cowboy Rawhide Robinson signs on with the US Army to sail across the sea to acquire animals for military service in the desert Southwest. Too late, he learns it is not horses he is after, but camels. Camels! Rawhide Robinson nearly revolts, but chooses instead to accompany Major Benjamin Wayne to fulfill the mission. Young naval officer Ensign Ian Scott teaches the cowboy seagoing ways while Rawhide Robinson teaches sailors the ways of the West and spins tall tales to relieve boredom.

After escaping mobsters in Palermo, the expedition sails to the port city of Smyrna. There, the Americans team up with “Harry” and “Hurry,” an experienced camel trainer and his precocious orphaned niece, and together they resist the attempts of the evil Hasan Hussein and his henchman Balaban to disrupt their work.

Back in America, the ungainly and unfamiliar camels cause nothing but upheaval as they venture across Texas. Army and civilian packers claim the camels are no match for their mules, and a desert challenge is mounted to test the ships of the desert. Hunger, thirst, and hardship accompany the mules and camels and their handlers on the trail—but fortune and adventure also await.

Will Harry and Hurry and Rawhide Robinson convince the army that camels are the way to go? Find out as an ordinary cowboy becomes a camel caballero.

Here’s an excerpt from Rawhide Robinson Rides a Dromedary as a young girl camel handler called “Hurry” instructs our ordinary cowboy in the delights of Levantine cuisine: