With pages filled with humor and insanity, you’ll enjoy riding along with the cowboy crew in Rawhide Robinson Rides the Tabby Trail: The True Tale of Wild West CATastrophe, winner of the 2015  Western Fictioneers Peacemaker Award and Finalist for a 2016 Western Writers of America Spur® Award. Order a copy from your local bookstore or find it in online in hardcover, large-print paperback, and e-book.

​Now available in paperback, eBook,
​and the original hardcover edition. 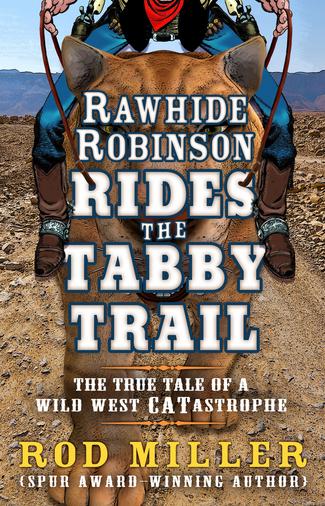 Somewhere, writer Rod Miller read a report from Tombstone, Arizona, issued during its heyday as a mining boomtown. It told of an infestation of rats and mice so severe that sleepers would squash the vermin when they rolled over in bed. That set him to thinking, “What if Rawhide Robinson...”

When ordinary cowboy Rawhide Robinson, babysitting a herd of beeves on a train bound for Chicago, reads about a rat infestation in the mining boomtown of Tombstone, he hatches a plan that results in yet another string of extraordinary adventures.

From the backlots and alleys of Chicago, where homeless waif Benedict Bickerstaff wheedles his way into the venture, to the rutted and dusty streets of Tombstone, Rawhide Robinson Rides the Tabby Trail recounts an Old West quest the likes of which the world had never seen, nor has witnessed since.

Retired mountain man Longshot Hawken shows the way down the Santa Fe Trail. Arlo Axelrod ramrods a reluctant cowboy crew of Zeb Howard, Johnny Londo, Tony Morales, and Frenchy Leroux. And as if handling an unpredictable herd wasn’t trouble enough, the shiftless Buckskin Zimmer does his best to do the worst to crew and critters. Then, the designing Don Carlos Valencia’s woeful wooing of the magnificent Magdalena Maria Martinez y Montez de Monterrey forces her to throw in with the cowboy band in an attempt to escape his clutches.

And all along the way, Rawhide Robinson holds the enterprise together as he meets every adventure head-on, and regales his drovers—and anybody else who will listen—with campfire tales of insane adventures, exploits, and escapades experienced elsewhere during his extraordinary cowboy career on the western frontier.

Here’s an excerpt from Rawhide Robinson Rides the Tabby Trail, as our ordinary cowboy comes to the end of another of his extraordinary adventures—a shooting contest with the famed sharpshooter Annie Oakley: 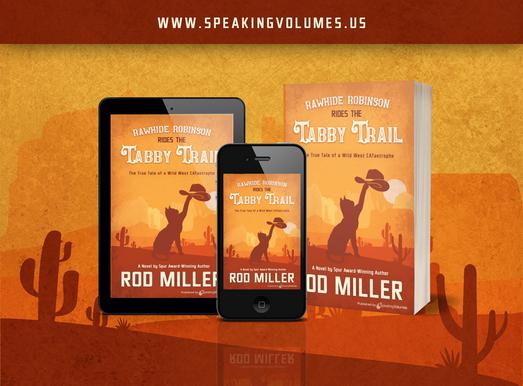 “Finally, I said, ‘Boys—and Miss Annie—this ain’t never going to end, and I am down to my last cartridge. So, let me propose a final shot.’ I explained what I had in mind, and they agreed that if I pulled it off I would be declared the winner, as it was so outlandish a suggestion that even the great Annie Oakley would not attempt to match it.

“So, I levered that final round into the chamber, licked my finger and held it up to test the wind, then took aim and fired—at nothing, it seemed. Then, we sat down to supper and, since it was coming on dark, retired for the evening. Come morning, Annie’s entourage gathered and treated me to a sumptuous breakfast—sliced ham, as I recall, with fried spuds and onions, scrambled eggs, grits, fresh tomatoes, buttered English muffins, steeped tea, coffee, of course, and—”

“—Enough, Rawhide!” someone interrupted. “We don’t care what you had for breakfast! Get on with the story!”

Rawhide Robinson tipped his thirteen-gallon hat back, scratched his chin whiskers, and sipped his coffee. “Sorry, boys,” he finally said, “but it was a breakfast worth remembering. Especially in light of what happened next.”

And so he continued.

“Well, not long after the dishes was cleared, I called for the feller whose job had been tossing those glass balls in the air. I told him to be ready to toss a target on my command. Then I requested silence and those assembled complied.

“I’ll tell you, boys, I like to have burst my eardrums so intense was my concentration on the auditory environment.

“Then I heard what I was listening for, faintly, oh so faintly. It was the sound of my bullet flying through the sky, coming toward us from the opposite direction in which I had fired it. The sound grew and grew and got louder and louder—but still beyond the hearing of all but me, as only I knew what to listen for and only I possessed the acoustic sensitivity to discern it—until I judged the time to be right and issued the command for the ball to be tossed, which it was, and just as it reached the apex of its flight, it burst into a bajillion pieces.”

“Well it’s simple, boys. I had shot plumb around the world and still hit the target. And if you don’t believe me—an eventuality I cannot imagine—just you ask Annie Oakley.”